Everyone watches The Walking Dead, right? I’m just going by the show’s ratings, which are so huge as to prove that basically one-third of the Earth’s population is currently watching The Walking Dead.

So chances are, you probably do too. 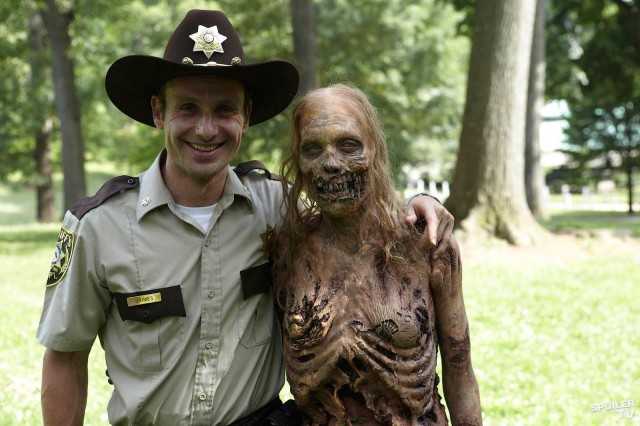 And in that case, you’re probably aware that the fifth season of everybody’s favorite gruesome corpse-disfiguring TV series is returning this fall.

If you somehow weren’t aware, well, AMC is here to remind you with two brand-new videos that promote the upcoming season.

The first is all about how the writing and the characters will grow over the course of the fifth season. Also we’ll learn this season’s overarching theme: “hierarchy.”

And the second video smartly realizes that Walking Dead fans care a lot less about “plot,” “characterization,” and “hierarchy” than they do about “zombies getting their brains finely pulped.” So the second video is all about the guts and glory; asking the cast and crew about their favorite kill, favorite walker, and favorite explosion.

So what do you think? Have a particular favorite kill/walker/explosion? Take offense at any of the choices rattled off by the various cast and crew? Still think it’s weird hearing Rick talk with a British accent? Because yes, Andrew Lincoln is (and has always been) an Englishman.

Chances are, he always will be.