Welcome to another Friday edition of ratchet news brought to you by me, Infinite7154.  I got a lot of responses from people about the issue of loyalty or the lack thereof.  I appreciate all the comments, keep them coming.  Today we are going to look at the trials and tribulations of Beyonce Knowles, Sean Cory Carter and William Leonard Roberts II.  All of them have found themselves in a bit of hot water for things they’ve done and said.

B and J took a trip to Cuba.  You know, the country that gave us Tony Montana, really good cigars, Elian Gonzalez, and Fidel Castro.  It seems Cuba is a communist country and to the USA, that’s bad.  Miami, FL has a large Cuban-American population.  Most of those people fled Cuba’s repressive regime and came to America by any means necessary.  There are so many Cubans in Miami that spanish almost the primary language.  It seems a couple of congressmen from FL, Reps. Ileana Ros-Lehtinen and Mario Diaz-Balar felt some type of way about the trip. 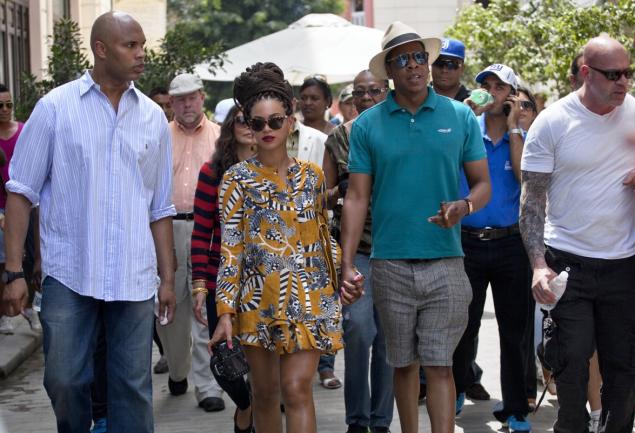 “Despite the clear prohibition against tourism in Cuba, numerous press reports described the couple’s trip as tourism, and the Castro regime touted it as such in its propaganda,” Reps. Ileana Ros-Lehtinen and Mario Diaz-Balart, both of Florida, wrote in the letter to the Treasury Department’s Office of Foreign Assets Control.”  Let’s be clear, the trip to Cuba is perfectly legal. J and B got their paperwork from the Treasury Department and went on their trip and it looks like they had a good time. 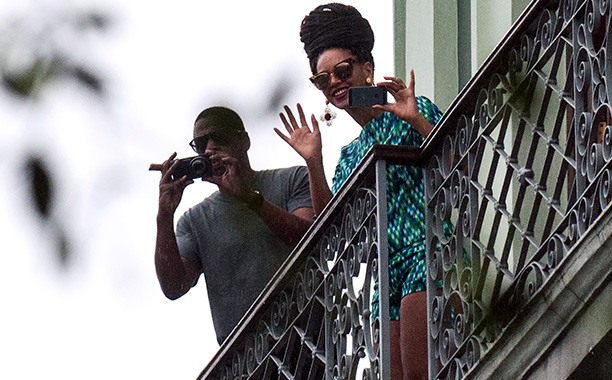 Now all of this comes on top of the fact that Jay-Z is selling his portion of the Brooklyn Nets (very small portion) so that he can become a basketball agent.  He has already signed NY Yankee Robinson Cano, and is reportedly going to sign NY Giant Victor Cruz.  Because he would also like to represent basketball players, he has to sell his stake in the Brooklyn Nets.  I’m figuring a lot of people didn’t know how little of the Nets Jay actually owned (1/15th of 1%, .067 percent), valued at about $350,000.  All over the internet he’s being called a fraud and a liar with his songs making it sound as if he were a bigger “owner” of the NBA franchise.  What these people aren’t taking into consideration is the impact he had on actually getting the team to Brooklyn, his input on pretty much everything involving the team and the fact that he was the first act in the new Barclay’s Center in which he sold out 8 shows back in September. 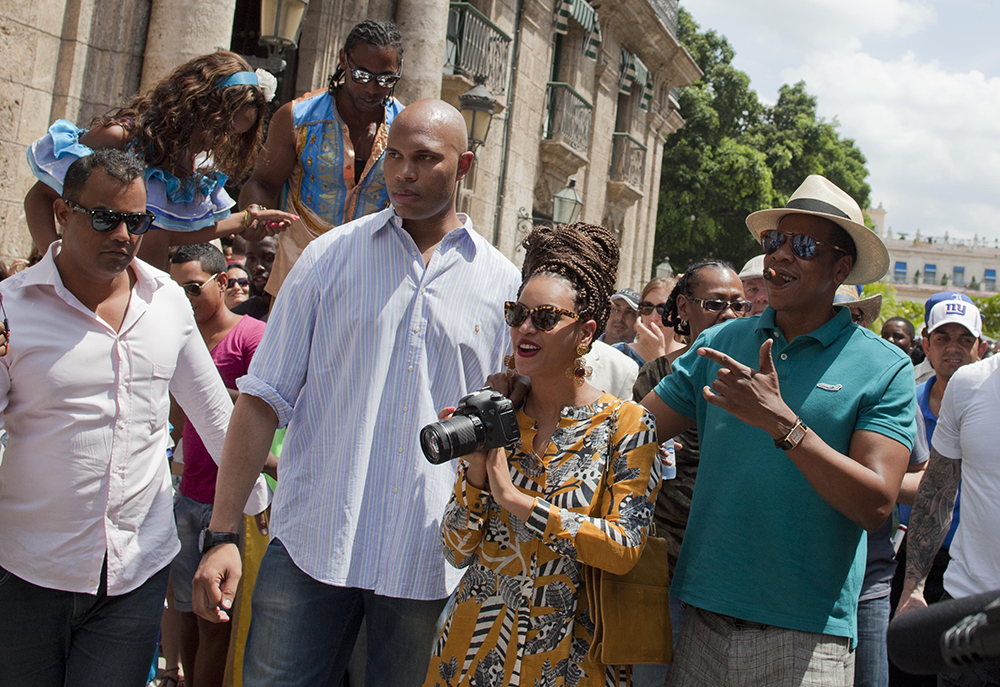 So what does Jay do?  He releases a song called “Open Letter”.  Sounds like Mr. Carter is tired of people running their mouths about shit they know nothing about. Take a listen:

Rick Ross has a completely different set of issues to deal with.  On 2/15/13, hip-hop artist Rocko released a mixtape, Gift of Gab 2.  On said mixtape there is a song titled “U.O.E.N.O.” which features Rozay and Future.  The Boss has these bars in the song: “Put molly all in her champagne, she ain’t even know it. I took her home and I enjoyed that, she ain’t even know it.”  And its been downhill ever since.  A group called Ultra Violet which is about empowering females and fighting for women’s rights (http://www.weareultraviolet.org/) to issue with the lyrics and called for Reebok to drop it’s deal with the rotund rapper (look it up). In a statement this is what Ultra Violet had to say about Ross: “By holding Rick Ross up as something to aspire to, Reebok is sending the message that raping a woman is cool — and that’s a dangerous message to send the boys and young men that Reebok markets to. This is what rape culture is.”  Please stop reading if you are easily offended…really…stop reading…. 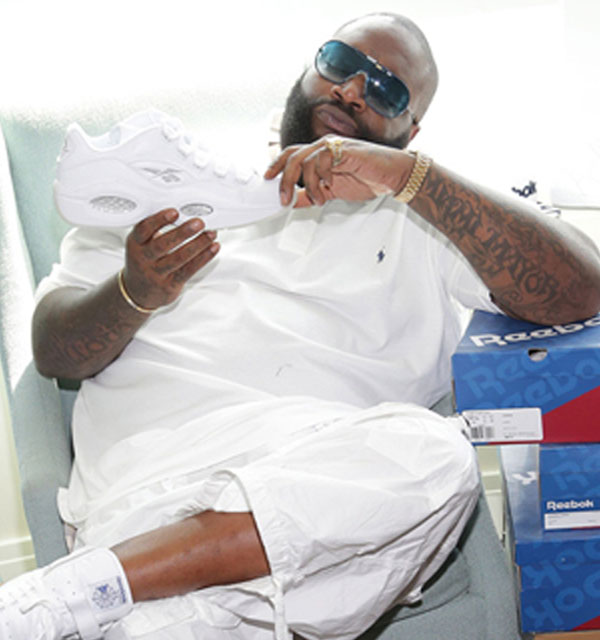 Are you fucking kidding me? You don’t fucking mind Reebok having a spokesperson who claims to have sold massive amounts of drugs (Jay-Z, Rick Ross, 50 Cent) has committed numerous murderous acts (Jay-Z, Rick Ross, 50 Cent), completely and totally decimated communities with the endorsement of drug dealer, hustler personal (again Jay-Z, Rick Ross, 50 Cent) but you want him to be dropped because he put a line in a song about putting Molly in a girls drink?!  Never mind Molly has been reference in songs for over a year now.  Never mind the fact that Reebok is looking to profit off of the “street credibility” these artists bring to the Reebok brand.  Nah…let’s not get angry about all the bullshit these artists spew BEFORE THEY GET THE FUCKING DEALS! Let’s not hold the record labels, radio stations, or corporations responsible for polluting the airwaves with only these types of artists. 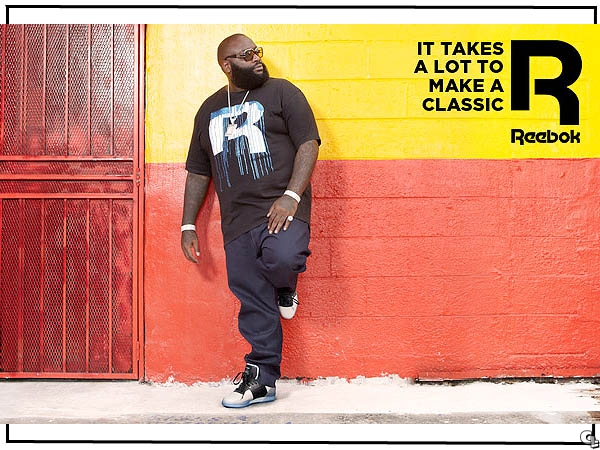 Ultra Violet has been around since 2011 and is made up of 5 young, white females.  So they don’t care about any of the messages of one Rick Ross.  They don’t care about all the money he and everyone else that promotes him has made off of the death and destruction he and his ilk promote.  No…it’s not a big deal until he says “Put molly all in her champagne, she ain’t even know it. I took her home and I enjoyed that, she ain’t even know it”.  Would it have been better if he put her on a stripper pole and spent racks on her to fuck?  Would it have been better if he would have shot her in the face?  Would it have been better if he would have given her a brick to drive across town?  Would it have been better if she was used to to rob some other drug dealer?  No…then why the fuck didn’t anybody have shit to say when he got signed by Reebok in the first place?  I’ll tell you why…because these stupid motherfuckers don’t listen to shit that’s being said in a song until they feel it offends their dumb asses.  Who the fuck heard this song anyway?  Who the fuck is Rocko?  The song has probably gotten more airplay because of the self entitled bitches then it ever would have if they would have just shut the fuck up. 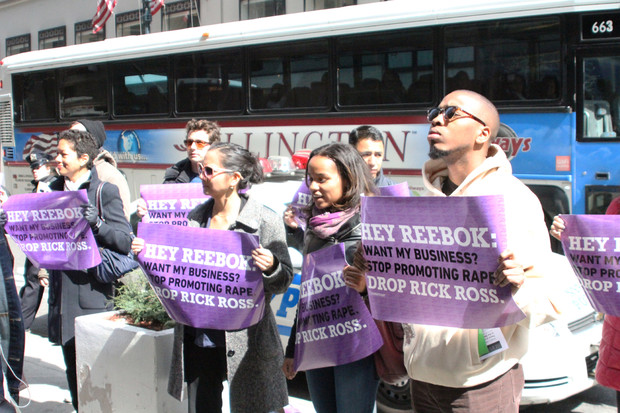 Let’s be clear, what Ross said IS RAPE!  You can’t have sex with a female if she isn’t in the right mind to give consent.  But that being said…we’re talking about a rap song.  We’re talking about a rapper who has said nigga, bitch and ho so many times over his career that I thought it was a group he was coming out with.  This is a rapper who have compared himself to ghetto superstars Big Meech, Larry Hoover and his namesake, Freeway Ricky Ross.  Why is anyone taking what he or any other rapper seriously?  Remember when Biggie said this: “Don’t they know my nigga Gutter fuckin’ kidnap kids? / Fuck ’em in the ass, throw ’em over the bridge.”  Or when DMX said this: “I’m comin in the house and I’m gunnin’ for your spouse/Tryin’ to send the bitch back to her maker/And if you got a daughter older then 15, I’ma rape her”.  And Eminem, with this verse: “Oh, now he’s raping his own mother, abusing a whore,snorting coke, and we gave him the Rolling Stone cover?”

You want to be mad about Rick’s molly reference, I’m cool with that.  Just make sure you don’t follow it up with a bullshit like this: “We are thrilled to hear that Reebok is joining the fight against rape culture and dropping Rick Ross. This is a huge victory for women, for the 526 survivors of rape who were brave enough to publicly confront rape culture, and for the nearly 100,000 UltraViolet members who have poured their hearts and time into this campaign. This sends a strong message that rapping about drugging and raping an unconscious woman is not only morally wrong, but has real consequences. After Steubenville, Americans expect and demand better. Thank you Reebok for taking a stand,” said UltraViolet co-founder Nita Chaudhary.