Stars React to ‘Orange is the New Black’ Emmy Nods

TV newcomer “Orange is the New Black” is getting a lot of attention today following its surprising spread of Emmy nominations. Many of the nominated actresses are first-time nominees. So how did they react to receiving this huge TV honor? 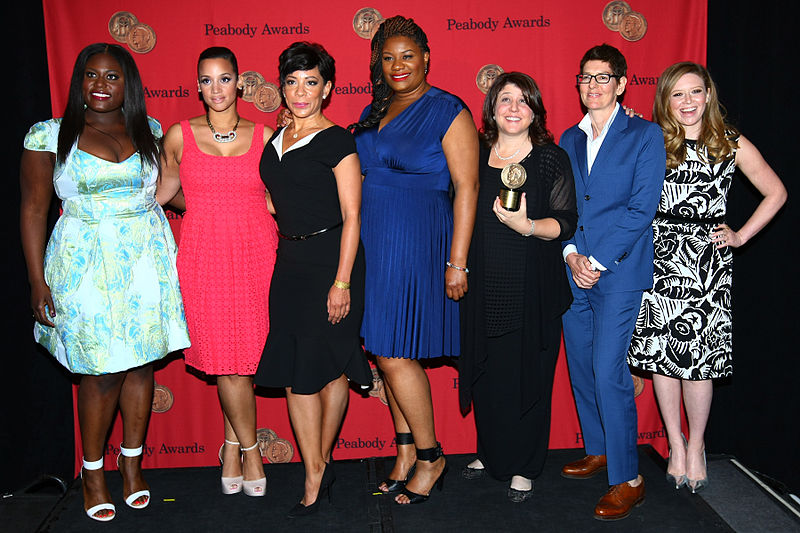 “Orange is the New Black” cast and crew at the Peabody Awards, 2014

Is Orange the New Gold, Too?

Netflix hit “Orange is the New Black” is nominated for Best Comedy Series, and a smattering of their familiar faces will be walking on the red carpet come award season. Leading lady Taylor Schilling received the Emmy nod for her work as Piper.

She was home when she found out she’d been nominated, and she was late to go to work on the “Orange” set. What she enjoyed most about the first season of the series was the journey Piper took, from the beginning of the season to the end. “That’s what was so exciting to me, to…go back in time with her and have the experience of who she was and where she started from.”

Laverne Cox, who plays transgender beauty technician Sophia on the series, is nominated in a guest actress role. “I’m through the roof,” she told the Hollywood Reporter. She’s the first-ever transgender person to receive an Emmy nomination for acting. “What a wonderful, wonderful day for Orange and for black trans women.”

Veteran actress Kate Mulgrew, who plays kitchen boss Red, is nominated for a supporting actress Emmy. She was asleep when the news broke that she was nominated. Mulgrew was sleeping off an injury from the night before; she’d burned her hand. Too much drama in the kitchen, maybe. Her favorite moment from season 1 was the chicken scene, where Red explains who the chicken is and why she wants it.

“There are many elements to this marvelous character that I think are yet to be tapped into,” she said of Red, and the future of the series.

Uzo Aduba, who plays Suzanne “Crazy Eyes” Warren on the series, was stuck in traffic when she got the news. She was on her way to the set when her publicist called to congratulate her. “I’m speechless,” she sad of her nomination. “We worked on this show and spent time together really just trying to tell a great story and invest in each other’s performances. It just feels good to know that people love the show as much as we love making it.”

The pie-throwing episode is one of Uzo’s favorite scenes from the series. No surprise, since this is the episode that was submitted to garner the series so many Emmy nods.

Natasha Lyonne, who plays Nicky, is also nominated for her guest actress role on the show. “Orange is the New Black” collected 12 nominations in all. Not bad at all, Netflix.