Universal Will Copy the Avengers’ Formula, Only With Monster Movies

Spider-Man has his own shared comic book movie universe (a note to everyone in charge of Spider-Man movies- this is entirely not necessary).

It’s the Universal Monsters- you know, like the Mummy or Dracula. Only done up all fresh and new and in a blatant rip-off of The Avengers. 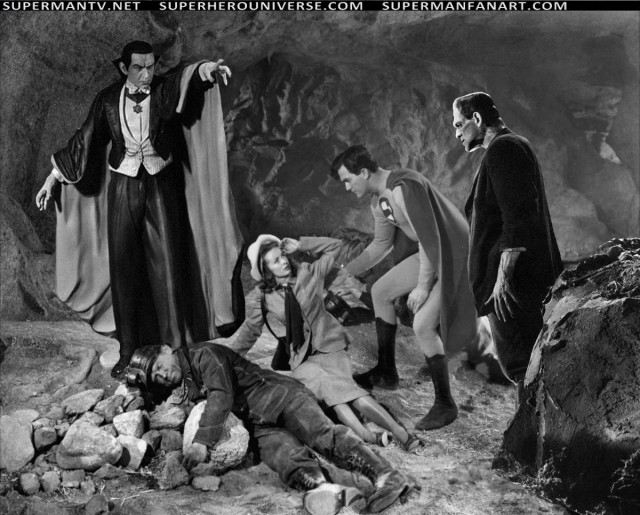 Please disregard Superman, he has gotten lost and wandered into the wrong movie

Deadline has this completely ridiculous and mildly insane scoop.

The masterminds of this new Universal Monsters Cinematic Universe (or whatever it’ll be called) are Chris Morgan and Alex Kurtzman. Morgan is the screenwriter of five seperate Fast and Furiouses, while Kurtzman is the megamoviemaker behind extremely large film franchises like Transformers and The Amazing Spider-Man.

Dracula: Untold comes out this year, but that one doesn’t count- the first monster flick to be universe-ized will be the Mummy reboot that’s scheduled for 2016. After that, all bets are off.

Now, back in the days when the Universal Monsters were the cutting edge of horror, they hung out in each other’s movies all the time. Just look above to see both Dracula and Frankenstein attempting to murder the comic book movie craze seventy years in advance.

But that was then, and this is the time of billion dollar franchises bleeding into each other to create even billion dollar-ier franchise mush. So if Universal can make a monster movie where the Wolf Man, Dracula and Frankenstein team up to do something vaguely sinister (seriously, what would they do? Fight crime? Solve mysteries? Just scare three times as many people as possible?), more power to them.