Dave Bautista May Be a Big Part of Avengers 3, Less So With the WWE

You’ve seen Guardians of the Galaxy, right? Maybe? The movie’s been #1 at the box office for about a month now, so chances are you’ve clicked on something with Dave Bautista in the title for that very reason.

So if you have seen Guardians, here’s a query: would you rather Bautista push forward with his acting career, or go back to shirtlessly pounding the tar out of other people without wearing green makeup? 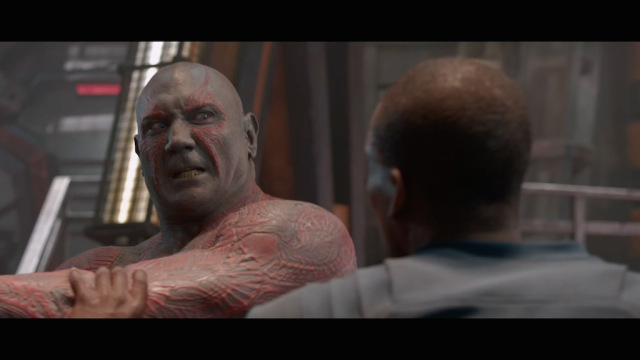 That’s the dilemma that’s come up, according to PWMania. They’re reporting that the wrestler-turned-galaxy-guardian is being offered a boatload of cash to continue with the Guardians franchise- and for a major role in Avengers 3.

We all expected him to return to the Guardians sequel (it says it right at the end of the movie: “The Guardians of the Galaxy Will Return”), but having an expanded role in the Marvel Universe would be a much bigger time commitment.

(Also, it’s a big ol’ clue that Avengers 3 would be the Infinity Gauntlet storyline, as that’s Drax the Destroyer’s shining moment in the comics).

The report says that Bautista’s Hollywood reps don’t want him wrestling anymore now that he’s in the movies, but Bautista’s not sure he wants to drop the WWE entirely.

As this is just a rumor (and from a wrestling site, no less- not a Hollywood publication) we’ll wait and see what develops. But the question still stands: would you prefer a Bautista that beats up dudes on the big screen, or the small screen?